B2B publisher Mark Allen Group is celebrating “yet another record year” in 2021/2022 and is ahead of budget for the current financial year despite the economic turbulence facing many in the media.

Earnings before interest, taxation, depreciation and amortisation were up by 28% to £13.1m.

The news follows a trading update from B2B giant Informa which last week increased its profit prediction for the year to at least £490m.

Chairman Mark Allen told Press Gazette: “I’m delighted with the results given the fact that we weren’t able until the second half of the year to run a single live exhibition or event and exhibitions and events are normally getting on for about a third of our revenue, so we were firing on one cylinder as far as events were concerned last year.”

The MA Exhibitions division made a “small token profit” last year, he said, compared to a loss of £2m the year before. However overall the group came through the Covid-19 pandemic “really well” even without live events, with profit growth of 20% in the year ending 31 March 2021. 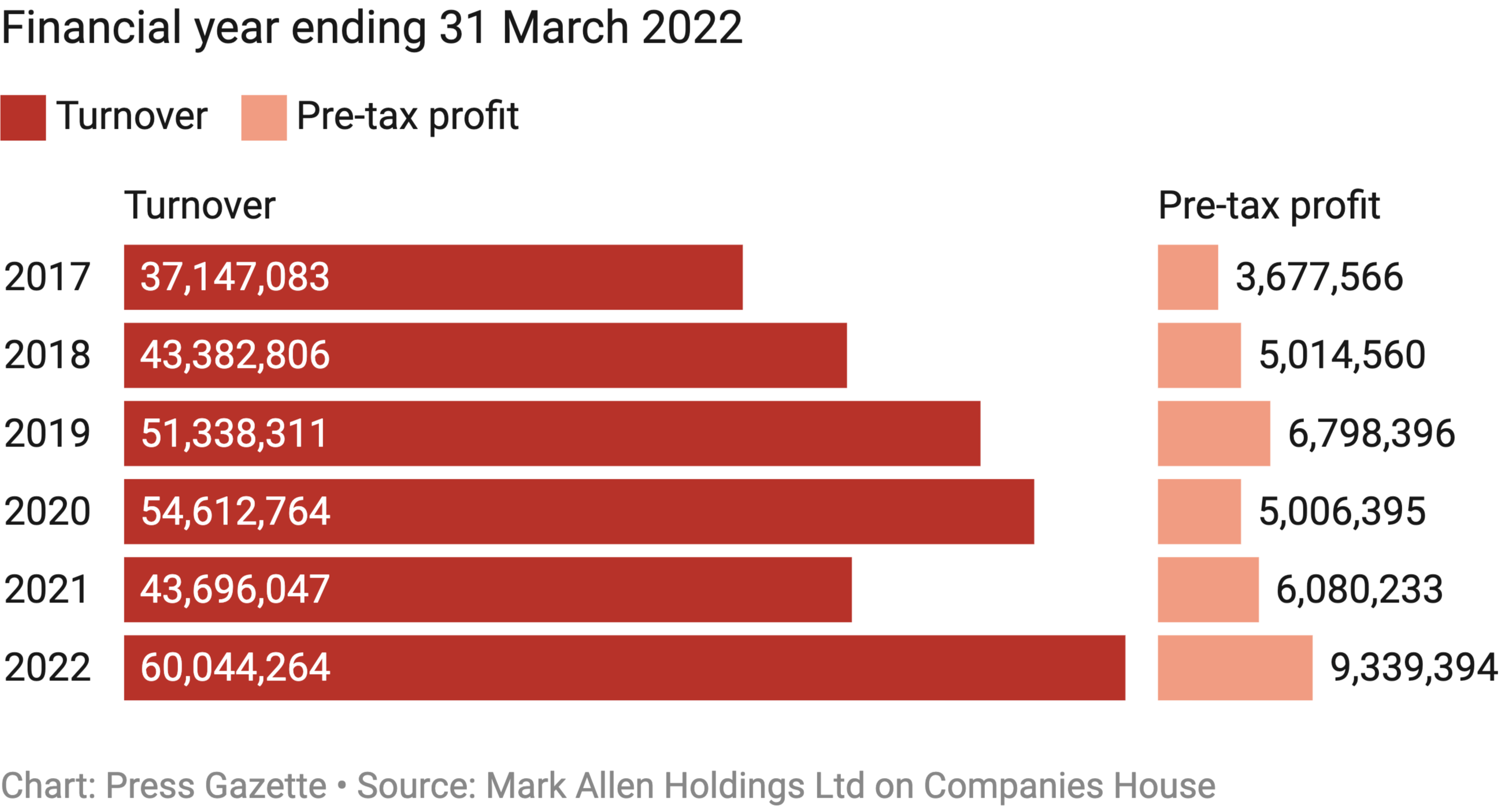 The group has been continuing the “controlled and sensible” rollout of digital products for its brands, many of which including Farmers Weekly are still highly reliant on print subscriptions, and digital now makes up £16m, or 27%, of total revenues.

The current high costs of print have "accelerated some of our movement to digital" but Mark Allen Group still does not want to "impose digital on all our readers and advertisers" if it is not what they want.

Nonetheless the continued digital rollout will be part of how the group "move[s] forward" this year, the accounts filed at Companies House said, while it also plans to continue growing both organically and by acquisition.

Advertising was the biggest revenue driver last year, making up 44% of the total, followed by 26% coming from subscriptions and bookstall sales and 25% from conferences. Three-quarters of all revenue came from within the UK.

Allen acknowledged that the current financial year was “tougher” due to the “political, economic, cost of living turbulence which everyone is facing” but said it is nonetheless running slightly ahead of budget and is expecting “small growth”.

Halfway through the financial year, the group was budgeted to make £6.9m but had crossed the £7m mark, putting it about £123,000 above budget.

Allen said: “Given the scenario that’s quite pleasing and we are hoping that the results for 2023 will be on a par or slightly better than 2022.”

He added: “But there are some considerable challenges… print production, distribution has shot up alarmingly and we are trying to do the best we can with our staff.”

To help staff, everyone earning under £30,000 was given a £1,000 pay boost in October. Allen said: “It’s important to me, to all of us, that we do right by those that have helped to ensure that we are successful.”

In May, Allen told Press Gazette’s Future of Media Explained podcast that he expected a “hard slog” this year. Now, he has said: “It hasn’t changed, this year is a harder slog than last year. I think we will come in with similar if not slightly better results to this year mainly because we’re doing live events and that’s performing very well and that will make a big difference.”

In a statement, he also said "the challenges are formidable and should not be under-estimated. If we can come through the year on a par or slightly ahead of 2022 this would be an unbelievable achievement".

Advertising and subscription revenues are both experiencing a “mixed bag” across brands, he said, which he put down to the wider turbulence.

Despite a "downward trend" beginning to be seen in subscriptions in the industry, Allen said the group's music titles, which include Music Teacher, Classical Music and Gramophone, were doing well on that basis - as are its institutional subscriptions.

"It’s a slightly mixed bag but on the whole given the state of the world we are not too displeased," he said.

Similarly, in advertising, some sectors such as aviation, transport and manufacturing are holding up "extremely well" but others less so and "it’s difficult to determine why some sectors are doing better than others," Allen said.

"The only real test is against the budgets and advertising is holding up well," he went on. "Generally it's probably not as good as last year but that's just the state of the world."

As the group's highest paid director, Allen's remuneration increased from £371,850 to £568,466, according to the Companies House accounts.

Allen said MA Dentistry was “highly profitable” in terms of profit to turnover which is more than 50%, but that it is small compared to some of the other companies.

He added that MA Exhibitions would likely be more profitable and rise back up the rankings in 2023 as it has been able to run live events since the start of the financial year unlike last year.

Mark Allen Group chief executive Ben Allen said in a statement: "Our financial performance tells one part of the story and it is a very good one. However, these results have come about as a result of the extraordinary efforts made by our teams. The way they have performed has been magnificent. No challenge is too much for them. They have shown amazing skill, spirit and resilience. We will need these same qualities in abundance if we are still to rise above the dark economic clouds which hover above."